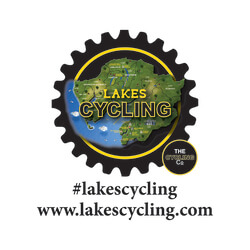 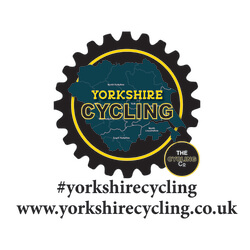 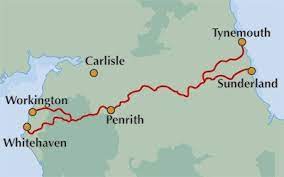 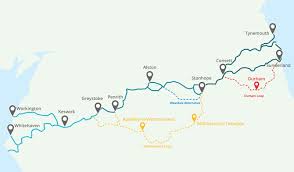 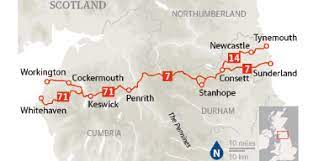 The UK’s most popular challenge cycle route, the C2C is often thought to stand for ‘Coast to Coast’, but the name is actually short for ‘Sea to Sea’. The iconic route travels 137 miles between the Irish Sea and the North Sea, from Cumbria to Tyneside, passing through the northern Lake District before climbing the Pennines and descending to the railway paths of County Durham.

The Coast to Coast or Sea to Sea Cycle Route (C2C) is a 140 miles (230 km) cycle route opened in 1994. Combining sections of National Cycle Route 7, 14, 71 and 72; it runs from Whitehaven or Workington on the west coast of Cumbria, and then crosses the Lake District and the Pennines in the north of England by using a variety of both on and off-road trails, ending on the north-east coast in Tyne and Wear at Sunderland or Tynemouth. Sustrans state that it is the UK’s most popular challenge cycle route,[1] it is designed for the whole range of cyclists, from families to cycling club riders. Although a challenge with some hard climbs—the highest point being over 609 m (1,998 ft)[1]—the C2C is completed by an average of between 12,800 and 15,000 cyclists every year.

The UK’s most popular challenge cycle route, the C2C is often thought to stand for ‘Coast to Coast’, but the name is actually short for ‘Sea to Sea’. The iconic route travels 137 miles between the Irish Sea and the North Sea, from Cumbria to Tyneside, passing through the northern Lake District before climbing the Pennines and descending to the railway paths of County Durham.

The Sea to Sea (C2C) can start at either Whitehaven or Workington, and has two possible endpoints on the North Sea coast in Sunderland or Tynemouth.

There are some sections of the Whitehaven to Sunderland route that are not part of the National Cycle Network.

Starting at Whitehaven; an old seaport on the west coast of Cumbria. The first ten miles of the C2C follows a well made surfaced path.

Quiet lanes follow as the route passes through some of the countries most beautiful scenery.

Kirkland and Lamplugh reveal the proximity of the Lakes mountains and on the steep descent from Fangs Brow to Loweswater there is a good view of Mellbreaks ahead.

The Whinlatter Pass is the first major climb ending in a fine descent on forest roads to Bass Lake and Keswick.

The next section takes the route on to Langwathby in the Eden Valley and has contrasting views and riding surfaces.

Alternate routes exist here, with the hardest one crossing Matterdale Common on the Old Coach Road to Greystoke, Blencow and the town of Penrith, reaching Langwathby on the Eden.

At this point a third of the ride is now complete, leaving behind the hills of the Lakes, with the Pennine crossing to come.

The most mountainous part of the route with four major climbs in 20 miles.

The first encountered and steepest is Hartside at 580 metres; this is the watershed between the Irish Sea and the North Sea.

It’s not all downhill from here. After Hartside, the route passes near Alston, reaching Garrigill and the old lead mining areas at Nenthead and Allenheads, reaching the highest part of the C2C at 609 metres on Black Hill.

This section marks the end of the rough hilly terrain of the North Pennines and the start of the industrial landscape of the North East.

The traffic-free Waskerley Way has impressive vistas of sweeping moorland before leading to the impressive Hownsgill viaduct and then onto Consett.

For most of this section, the Consett and Sunderland railway path is flat and easy to follow.

There’s a lot to see along the route with a varied mix of trail side sculptures, and possible visits to the Beamish Open Air Museum and the Washington Wildfowl Wetlands Centre.

The fine views across the River Wear continue as you enter the city of Sunderland and follow the water’s edge to the route’s official end at the Star Map sculpture along the seafront at Roker.

Most riders follow the tradition of dipping their back wheel in the Irish Sea at the start of the journey and their front wheel in the North Sea when they finish.

There are no reviews yet.