Milan–San Remo (in Italian Milano-Sanremo), also called “The Spring classic” or “La Classicissima”, is an annual cycling race between Milan and Sanremo, in Northwest Italy. With a distance of 298 km (~185.2 miles) it is the longest professional one-day race in modern cycling. It is the first major classic race of the season, usually held on the third Saturday of March. The first edition was held in 1907.

Today it is one of the five Monuments of cycling. It was the opening race of the UCI Road World Cup series until the series was replaced by the UCI ProTour in 2005 and the World Tour in 2011.

From 1999 to 2005, a women’s race, the Primavera Rosa, was organized alongside the men’s but at a shorter distance.

At almost 300 kilometers the Milan-Sanremo tests rider’s patience and endurance. The Milan Sanremo pro race is THE monumental classic one day race in the whole of the professional calendar.

The race is organised by the Italian race organisers RCS, owners of sports newspaper Gazetta dello Sport, the same people who organise the Giro d’Italia. This Spring Classic covers nearly 300km from Milan, south to the coast. Always held at the beginning of the year, it is a true “classic” event, with most of the world’s major cycling heroes having won it at some point.

Belgium’s Wout van Aert (Team Jumbo – Visma) pipped Julian Alaphilippe (Deceuninck – Quick Step) on the line of Milano-Sanremo to claim the first Monument of his career. He followed the path of the Frenchman who won both Strade Bianche and La Classicissima last year. Australia’s Michael Matthews (Team Sunweb) rounded out the podium in spectacular fashion as he won the bunch sprint after a bad crash on the Poggio.

Put yourself to the test in the Great Classic of amateur cycling!

The Granfondo MILAN – SAN REMO cicloturistica covers the same route as that followed by the great champions in the Spring Classic.

This is the longest amateur cycling event in the world, with a distance of about 296 km from the outskirts of Milan, crossing the Lombardy and Piedmont Plains, proceeding to the ascent of the Turchino and arriving finally at the Ligurian Riviera. From Genoa the route follows the coast of the Ligurian sea right to the finish line, which can only be conquered by venturing up the legendary climbs of the Cipressa and the Poggio of San Remo.

The MILAN – SAN REMO cicloturistica began in 1970 on the initiative of the Unione Cicloturistica Sanremo, and they have organized it ever since without a break, making it into the most famous cicloturistica event in Italy.

The last editions welcomed in all about 2,000 athletes coming from all over Europe, with the participation also of athletes from countries as far away as New Zealand, Australia, Malaysia, Brazil, the United States and Canada.

Riccione “The Green Pearl” is an ideal place for a holiday as well as a race. It is this all-inclusive character, combined with the potential for an outstanding middle distance course, which led Challenge Family to make Challenge Riccione a reality.

In keeping with Challenge’s focus on athlete experience, the Challenge Riccione course is designed to include the best of this spectacular region and promises to be one of the most cultural middle distance courses in the world.

The course
Starting in the seaside resort of Riccione, the warm waters of the Adriatic Sea will host the 1.9km swim following which the 90km bike course will head high into the hills surrounding Rimini along roads built by the great Roman emperors.

Travelling through the Emilia Romagna Apennines, an area renowned for its stunning landscapes and many fortresses and castles, the course visits the historic towns of Coriano, Montegrimano, Monte Cerignone and Montescudo before heading back down to the Riviera. The 21km run is a three-lap course along Riccione’s famous promenade, lined with bars, shops and restaurants and a crowd of thousands before finishing in the heart of Riccione Terme.

Explore the beauty of Siena in Tuscany while watching some incredible cycling on the famous white gravel roads of the Strade Bianche. Ride on the course and cross under the official finish line just hours before the Pros on our cross the finish experience on Saturday. Take photos on the official podium and await the arrival of the riders in style from our finish hospitality venue in Siena. We offer a choice of start pen including front pen for the GF Strade Bianche.

The Strade Bianche Gran Fondo and Pro race weekend usually takes place early March. The Strade Bianche is one of the most popular cycle races on the circuit with its unique character and fantastic location in and around Siena in Tuscany, Italy. Even though the race has only been taking place in the last 10 years, it attracts a lot of attention and was added as a UCI World Tour event in 2017.

This weekend offers you the opportunity to ride your bike with us on the Saturday to watch the 2022 Strade Bianche and to then cycle the 2022 Gran Fondo Strade Bianche on the Sunday.

2 available routes both with departure and finish line to Siena.
The long route is the same of the Women élite race.
The short road is the same until to Murlo, where he takes the right with a dirt road sector and a descent to Monteroni d’Arbia.
The last kilometers are the same for both routes.

The Strade Bianche is a road bicycle race in Tuscany, Central Italy, starting and finishing in Siena. First held in 2007, it is raced annually on the first or second Saturday of March. The name Strade Bianche (Italian for White Roads) stems from the historic white gravel roads in the Crete Senesi, which are a defining feature of the race. One third of the total race distance is raced on dirt roads, covering 63 km of strade bianche, spread over 11 sectors.

Despite its short history, the Strade Bianche has quickly gained prestige. The event is part of the UCI World Tour, cycling’s highest level of professional road races. It is organized by RCS Sport – La Gazzetta dello Sport, and is held the weekend before Tirreno–Adriatico as an early spring precursor to the cobbled classics in April. 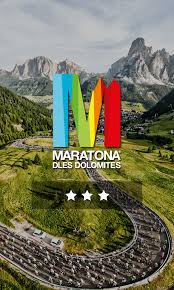 31,000 CYCLISTS CHASING JUST 9,000 PLACES
All of our charity places in the 34th edition of Maratona dles Dolomites – Enel taking part in 2021 are SOLD OUT!

Fancy taking part in 2022? If so, complete the application form to be added to the waiting list and a member of the team will be in touch.

With 31,000 cyclists chasing just 9,000 places the Maratona dles Dolomites cycle, (classed as one of the most important amateur cyclist events in the whole of Europe) is a must for any cycling enthusiast. This sportive is up there with the likes of La Marmotte in terms of challenge and is a test of physical and mental strength.

Note: The registration payment is just for your place on the ride. With most operators, you’ll need to enter into a package but with Action Medical Research you are free to co-ordinate your trip independently. Flights, accommodation and transfers are not included and will need to be booked independently.

Eligibility – We are only able to accept registrations from those who are not Italian residents living in Italy which includes anyone abroad who currently resides in Italy. This is a condition set by Maratona dles Dolomites – Enel.